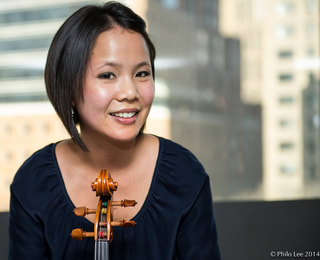 Violist Jessica Chang leads a versatile career as a chamber musician, recitalist, and educator. As the Founder and Executive Director of Chamber Music by the Bay, Ms. Chang directs and performs interactive concerts for diverse communities throughout the San Francisco Bay Area which reach over 2,000 young audience members annually. Her work as a teaching artist has led to concert residencies with Project 440, the Savannah Music Festival, and Music from Angel Fire. She has also served as violist of the Afiara Quartet, with whom she toured North America, including a visiting faculty residency at The Banff Centre in Alberta and residency as the Glenn Gould School Fellowship Quartet-in-Residence at the Royal Conservatory of Music in Toronto, Canada.

​Ms. Chang is a graduate of Yale University, where she received her Bachelor of Arts degree with honors and distinction. She also holds an Artist Diploma from the Curtis Institute of Music as the recipient of the William A. Loeb Fellowship, and a Master of Music degree from The Juilliard School. Ms. Chang studied with Heidi Castleman, Steven Tenenbom, Roberto Díaz, Michael Tree, Misha Amory, Daniel Panner, Jodi Levitz, Jesse Levine, and Jenny Rudin.

A sought-after chamber musician and teacher, Ms. Chang maintains a private studio in the San Francisco Bay Area. She performs frequently with ensembles including Ensemble Illume, Ensemble San Francisco, the Ives Collective, and Chamber Music Silicon Valley. Ms. Chang currently serves as the Executive Director of Chamber Music by the Bay and as a Board Member of the American Viola Society. She also leads a dual career in information security as a technical program manager and is an industry-recognized speaker globally on building and scaling security culture.
© JESSICA CHANG 2021 | All Rights Reserved.